Leeds Beckett 'Quote, Unquote' guide provides information on the Harvard referencing system, including how to reference a variety of different formats and media.

You can also purchase a print copy from our Online Store.

Daily appointments are usually available (weekdays only) where you can get more help with Harvard or OSCOLA (Law) or APA (Psychology) referencing. Click on Get Help below to book an appointment, or you can ask via the Library's Contact Us page.

Referencing is how you point to other sources (books, journals, webpages etc.) you have used in writing your work. It consists of two parts: the citation and the reference.

The citation is a marker in the text to indicate that the information you refer to has come from somewhere else. The reference contains the full information about the source you used to allow someone else to find the source.

In Harvard referencing the citation consists of an author (family name or name of organisation) and year in round brackets, e.g. (Smith, 2019). Insert the citation as soon as you refer to a source in the text.

The full details of all the sources used in your text are presented at the end of your piece of work in a reference list alphabetised by family name of the author (or name of organisation). The reference list should begin on a new page titled “Reference list” (with no quotation marks) at the top of the page.

As you read for your course, you may see other types of referencing used (numbered styles, etc.). This guide is designed to help you reference for your course at Leeds Beckett University. If you are writing for another purpose you may want to check any conventions you need to follow. 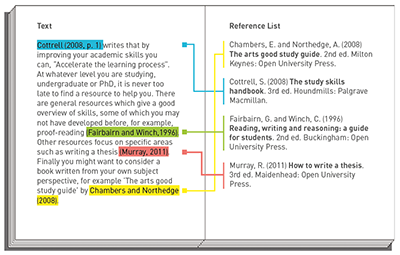 TIP
When you are searching the literature, save or note down all the required details of the sources that you find at the time. If you don’t do this, you might not be able to accurately reference the sources you have used, and you will have additional work to do when you compile your list of references.

Citing sources in your work

You may refer to an author’s work by any of the following:

All of the above need a citation in the text.

Insert the citation as soon as you refer to a source in the text. It is completely your choice whether you want to include the author’s name in your sentence or not. Your writing will flow better if you use a variety of ways of inserting the citation, for example:

Extreme caution should be used when using secondary referencing. You should always try and find the original source and cite from that rather than the interpretation you have read. If it is not feasible to do this, you may cite as a secondary source.

For one author include the author’s family name and date, as above. For two authors include both family names e.g. Smith and Jones (2018) argued …

For three or more authors of one work include the first author and the words 'and others' or ‘et al.’ (meaning ‘and others’ in Latin) e.g. (Peterson et al., 2016). In your Reference list include the family names of all authors.

If there is no named individual use the name of the organisation, known as the corporate author, e.g. (NHS, 2018).

Where you use an abbreviated form of an organisation’s name (e.g. NHS or NICE) in the citation, you MUST use the same abbreviation in the reference list.

Where there is no author information available, cite using the title.

When capitalised, the first part of the name should always be treated as part of the last name, e.g. La Plante, L.

But if the first part is not capitalised, you can treat it as a suffix that goes after the first name, e.g. Gogh, V. v.

Citing more than one source at one point in the text

List the sources in order of publication date, oldest first.

Citing more than one source from the same author in the same year
Use a lowercase a, b or c etc. after the date within the citation to identify which source is which.

Example:
In the long-term plan (NHS, 2019a) proposals were outlined for reducing pressure on emergency medicine. The implementation document (NHS, 2019b) contained the information about how this was to be done …

Where you need to include a page number in a citation when using a direct quote or data use p. for a single page and pp. for a range of pages. If no page number is available (for webpages, or other unpaginated sources include (n.p.) in place of the page numbers). If there is another useful locator - for example, the duration into a video, you can include that in the same place, e.g. 1m34s.

If removing text from a quotation, use an ellipsis (a series of three full dots signalling that words have been omitted from quoted text).

Example:
"There is grandeur in this view of life…from so simple a beginning endless forms most beautiful and most wonderful being, evolved” (Darwin, 1859, p. 490).

If adding text to a quotation (for example, to clarify meaning), add square brackets around the added text.

Example:
“They [the council employees] were debating working practices all that year and still reached no consensus” (James, 1999, p. 22).

You can identify a mistake in a quotation using the Latin word ‘sic’ (meaning ‘intentionally so written’) in square brackets. This is done to show that the mistake is in the source, and that you have not made an error in transcribing the quotation.

For some long pieces of work you may be allowed to include appendices which are additional bits of information not otherwise available to the reader. Appendices should be clearly labelled with either a letter or a number. Referring to information in appendices is not really referencing but more signposting to the additional information, for example: (see Appendix 1).

If you need to include references to published works (books, journals etc.) within your appendices do this exactly as you would in the body of your text, insert a citation in the appendix and the full reference within the bibliography for your project or dissertation.

If you want to refer to the appendices within another source, indicate it is from the appendix within the citation as you would a page number for a direct quotation, for example: (Khan, 2018, Appendix C p.4).

You must always include a Reference list at the end of your work. This is a list of all references you have used alphabetised by author family name and providing the publication details (author, publication date, title, publisher information, etc.) of all the sources you have used and cited in your assignment.

Be consistent in your formatting and layout throughout the Reference list.

We have included examples of the main sources you may want to reference in this guide, but no guide is completely comprehensive. We have also included additional examples in the online version.

If you cannot find the source you wish to reference here, there is a general pattern you can follow.

Tell us what you think

If you have any feedback on the new edition of Quote, Unquote, please complete the feedback form.